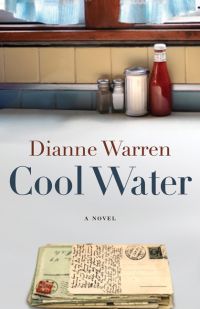 Reading Dianne Warren’s Cool Water  was a moving, gentle, lovely experience. Set in Juliet, Saskatchewan, with a population of just over a thousand, the novel takes place in a day and a half. Warren’s characters are wonderfully human: Lee, crossing into manhood and taking over the family farm after the death of his adoptive parents; Vicki and Blaine, raising six kids under the imminent threat of foreclosure; Norval, a bank manager grappling with the weight of his responsibility; Marian and Willard, living together since the death of Marian’s husband (Willard’s brother), too shy to recognize their burgeoning attraction. Warren’s writing reminds me of Alice Munro (my favourite writer), but with much more sympathetic characters. And like the relationships in Munro’s stories, the couples in Cool Water are far from perfect, but they make it work. They don’t ditch their marriages, but the individuals find their own small ways to assert themselves.

I was honoured to have the chance to ask Dianne Warren a few questions about the book:

JF: Are you from a small town yourself?

DW:  I’m from a pretty small town, but not as small as Juliet. My extended family are farm and ranch people and I spent a lot of time as a kid on my grandparents’ farm.  I also lived for several years in a small community not unlike Juliet, but in a different Saskatchewan landscape.  I think most people my age who live in Saskatchewan are familiar with life outside the cities, and most would be only one generation away from rural life.  That is changing, though.

JF: Are these people modelled after folks you know?

DW:  I always find that hard to answer.  I never set out to model a character after someone I know, so the direct answer is no, they’re not based on real people.  But writers are always collecting information on people and why they do the things they do.  We’re kind like of armchair psychologists, trying to figure out human nature.  So perhaps some of the things the characters do are things I’ve seen in real people or real situations.

JF: You seem to really like them (and I do too).

DW:  I do like the characters in this book.  (Well, maybe not Dale Patterson.  And maybe I find Lila a bit insufferable, but I think I understand her and why she is the way she is.) Maybe it’s the characters’ generosity toward others that makes them likable.  For example, it would be pretty easy to dislike Lynn because she’s so crusty and even angry.  But in the end, she admits her behaviour over the cell phone calls is ridiculous and I think we can see her generosity of spirit.  Dale, on the other hand, has no generosity that we can see.  In the last scene in which he appears, he’s decidedly ungenerous toward Lee and the Arab horse.  And I think Lila redeems herself in the end when she takes the drunken Kyle in to sleep in her basement.

JF: What do you read? Which writers have influenced your work the most?

DW: I really can’t say what writers I’ve been influenced by.  It’s a cumulative thing, a little from here, a little from there.  I read all my father’s Zane Grey books when I was a kid and this perhaps sparked my later interest in the falseness of romantic mythologies, especially those concerning the west.  I was definitely influenced by Catcher in the Rye as the first novel I read that had a contemporary literary voice.  I was excited to discover Margaret Atwood, Margaret Laurence and Alice Munro when I was young because they were women, and because I recognized Canada in their work. Although I don’t like all of their books, I was happy to discover American writers such as Larry McMurtry and Thomas McGuane because of the contemporary western settings.  I try to keep up with Canadian books but still be eclectic in my reading.  I’m reading a Jonathon Lethem novel right now and just finished Barbara Kingsolver’s The Lacuna.

JF: Are you advocating a certain degree of pragmatism when it comes to love?

DW: Pragmatism when it comes to love.  Hmm.  I’m not much of
a romantic in my writing about relationships but I hope the deep attachments come through, and the level of emotional dependence that develops over time.  The relationships in the book where couples are sticking it out are “old” ones.  It might seem that a couple like Norval and Lila are staying together for practical reasons – the arrangement that Norval talks about – but there is deep emotional attachment there that has grown over their years of knowing one another.  I do believe Norval loves Lila even as he’s sounding like a marriage cynic.  One the other hand, I think the Dale-Karla relationship is destined to fail and I hope it does.  I hope Karla uses her head.  But I want Willard to follow his heart and let Marian love him.

JF: Are you as patient and understanding as Vicki?

DW: You’d have to ask them, but my mother-in-law (of whom I was very fond) used to say to me, “You’re more patient than I was,” which I always thought was her way of telling me I should be more strict.  One of my son’s recently said to me, “You should have got after us more,” which really did make me laugh because he would not have agreed when he was fifteen and thought I was wrecking his life by having rules.  But I guess I’m a pretty patient person.  I think there’s a bit of Vicki in me.

JF:  What are you working on next?

DW: I’m at work on another novel.  The working title is “Liberty Street” but I’m sure that will change.  It’s about a woman who, at 18, married a man much older than she was and then left the marriage a week later when she realized what a mistake she’d made.  The novel is then about the years of repercussions.

I’m already looking forward to the next book!